MIMIC is an extremely scalable SNMP simulator. It supports up to 100,000 simulated devices on a 64-bit processor (Intel Xeon or AMD64) and 10,000 on a 32-bit processor. MIMIC simulations are highly optimized for the use of the CPU and memory. They are tested regularly to make sure that acceptable performance numbers are met even with large numbers of SNMP agents.

When you are looking to do scalability testing, you will have two primary concerns. First, whether MIMIC can simulate a large number of SNMP agents? Second, will the performance be adequate to run many agents on one workstation? We take these concerns very seriously. We support our claims with actual performance tests, rather than interpolating them from small simulation scenarios. 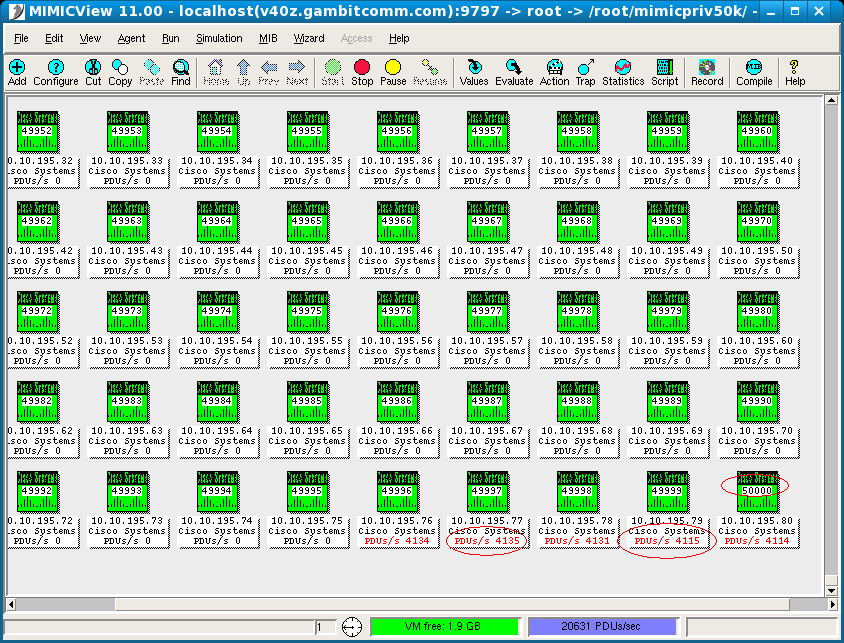 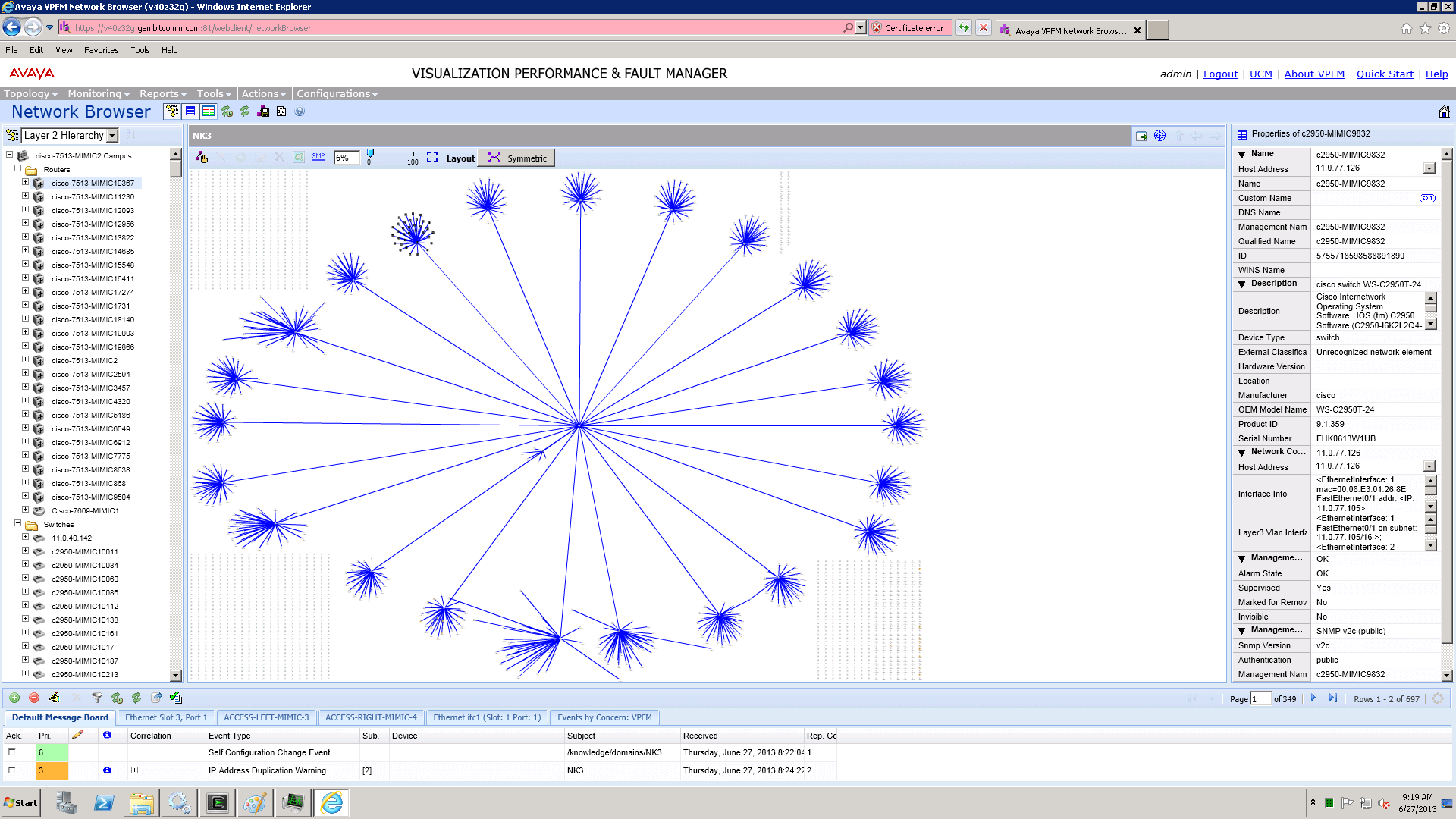 This page will give you a good idea about MIMIC's performance numbers on various platforms and scenarios. It includes the test results in a series of reports for different hardware platforms and operating systems. It also includes recommendations for a suitable system. This will help you decide how MIMIC compares with other simulators and what system configuration you need.

Also, check out the truth about "unlimited agent licenses" here

Each hardware platform / operating system combination has different performance characteristics. For MIMIC, performance is primarily governed by the number of CPUs and the amount of physical memory (RAM).

MIMIC will take advantage of all the CPU power you throw at it. It is designed like a real-time operating system to distribute processing over all available computing resources.

The memory requirements depend on the simulations you are going to run. For instance, a high-end router simulation with hundreds of interfaces, RMON tables, etc. is going to take more memory than the simulation of an end system.

It is obvious that you see the best performance with a small number (10 to 25) of simulated devices (about 20,000 PDUs per second on commonly available desktop PCs). The real concerns arise when using a fully loaded workstation with 10,000 to 100,000 SNMP agents. You'll want at least hundreds of cumulative PDUs per second to make a simulation viable. Our tests confirm the maximum claimed number to prove scalability.

The performance test is designed to measure peak performance of MIMIC on various supported platforms under common access scenarios. The supported platforms are Windows or Linux. The variables in the test are the number of agents running simultaneously, and the number of agents being accessed. It is assumed that the most common SNMP request is a GETBULK, as is usually done in table traversals.

The following is a selection of reports that have been published to the MIMIC User community:

Here is an excerpt from one of the reports:

Previous reports detailed comparisons between different versions of Linux and Windows. This is the latest performance report for MIMIC 12.00 on the best-performing Linux and Windows platforms. This latest test features current hardware (quad core Intel) and 1 Gb networking between MIMIC system and management system. We focus on 64-bit executable performance, since that is becoming the common case. It is also the first test that includes Amazon Web Services (AWS) cloud instances to compare to natively running operating systems..."

With each release of MIMIC, we're constantly improving the performance. Please contact our sales department for the latest detailed performance test reports.

As a ball-park estimate, we like to see at least 1MB of dedicated physical RAM per simulated agent, e.g., a 1000 agent scenario should run fine on a 1GB system (depending on how much memory is used by the OS and other processes). For better performance (less swapping), 2MB per agent is recommended. When the agents are running the same simulation, MIMIC optimizes memory usage to contain only one copy of the simulation data for all agents of the same type.

You can more accurately measure this by running a simulation configuration, and checking on memory usage before and after starting the desired agent simulations. Notice that MIMIC uses memory on demand, so you should measure the memory after doing a walk of the desired tables (or a complete MIB walk). Eg. On Windows NT use the Windows Task Manager to check "Memory Usage", and on Unix use the "top" utility. The memory usage by MIMIC is approximately the same for all platforms.

The type of CPU is of secondary importance except for the most demanding simulations involving more than 10,000 agents. Most modern processors (e.g., Intel Core i5 or faster) are adequate. MIMIC works with multi-processor systems, since it is a multi-threaded, distributed application. Agent thread processing will be distributed efficiently across multiple CPUs.

The final bottleneck would be the network pipe to your agents. 100Mb Ethernet is adequate for low-volume traffic, 1Gb or 10Gb is better for more demanding applications. MIMIC works with multiple network adapters on your system, so you can talk to the simulations over separate network pipes. MIMIC works with the OS-native protocol stacks, so that all network interface cards that your OS supports can be used. You can even run MIMIC over PPP or wireless.

When you are making a decision to buy a simulator for scalability testing, your concerns about feasibility and performance are very valid. We make sure that MIMIC can simulate the number of agents you buy on a reasonably sized system, which gives you adequate performance numbers. This is why we have an upper limit of 100,000 agents. We don't believe in offering a vague number like "unlimited" because there is no such thing as "unlimited" when you have operating system, CPU and memory limitations.

We strongly recommend doing comparison tests with a large number of SNMP agents. You will find that no other products in the market can reach the desired number (above 1,000) of agents plus, the performance for a large number of agents is not even close to what you get with MIMIC. MIMIC's numbers are drastically better.

You're embarking on a critical decision on what solution is right for scalability; you owe it to yourself to do the comparisons.